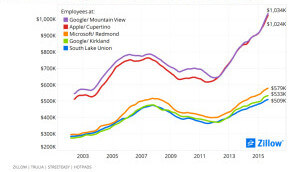 That’s a big selling point as the city’s talent-starved tech companies compete with Silicon Valley and New York for workers.

Seattle is the least expensive of all the nation’s top high-tech markets. Here’s how the buying power of Seattle’s top tech salaries compares to Silicon Valley, New York, San Francisco and Boston.

The Seattle area’s lower cost of living means tech recruiters here can offer the same quality of life for less when they hire from other high-tech markets. That’s a huge advantage in a region that struggles to train enough workers to sustain its growing tech industry.

One tech worker took a $35,000 pay cut when she moved from Silicon Valley because she said her money would be worth more in Seattle. An entrepreneur moved more than 800 miles from the San Francisco Bay area because he said it’s cheaper to start a business in this city.

That’s according to a Puget Sound Business Journal analysis of data from U.S. Department of Economic Analysis, which tracks price disparities between major cities.

Read the original article and explore the data more fully at http://www.bizjournals.com